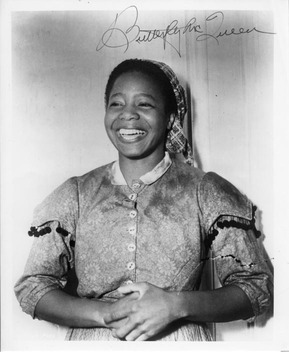 Thelma “Butterfly” McQueen, known for her role in the as Prissy, Scarlett O’Hara’s maid, in the film Gone With The Wind, was a outspoken atheist most of her life. She was featured in a bus ad campaign by the Freedom from Religion Foundation (FFRF) in 2009.

In 1989, the FFRF honored her with its Freethought Heroine Award.  She told a reporter for the Atlanta Journal-Constitution, “As my ancestors are free from slavery, I am free from the slavery of religion. I’m an atheist, and Christianity appears to me to be the most absurd imposture of all the religions, and I’m puzzled that so many people can’t see through a religion that encourages irresponsibility and bigotry.”

She railed against being typecast as a maid and roles that were demeaning to African-American actors.  Even though she could not attend the premiere of Gone With The Wind in 1939, held at a whites-only theater, she was a guest of honor at the 1989 50th anniversary event of the film.

Butterfly McQueen never married and split her time between New York City and Augusta, Georgia.  At aged 64, McQueen received a bachelor’s degree in political science from City College of New York, in 1975.  In an tragic accident with a kerosene heater, Ms. McQueen was burned and died December 22, 1995, at age 84.

A Youtube video recorded in 1989, shows a profile of McQueen.  In Celebrities In Hell (Warren Allen Smith, sequel to Who’s Who In Hell) she is quoted “They say the streets are going to be beautiful in Heaven. Well, I’m trying to make the streets beautiful here … When it’s clean and beautiful, I think America is heaven. And some people are hell.”